Father Edward G. Cimbala, D.Min was elected to serve as Administrator of the Byzantine Catholic Eparchy of Passaic by the College of Consultors on Monday, April 23, 2012, the Feast of Saint George and served until Bishop Kurt Burnette was named as the fifth Bishop of Passaic.  He was elected to fill the administrative vacancy created by the elevation of the former Bishop of Passaic, Bishop William Skurla, as Metropolitan Archbishop of the Archeparchy of Pittsburgh.

Born in Trenton, NJ on February 15, 1955, Father Cimbala is the son of the late +Peter Cimbala and Betty Lee Cimbala (Terryberry) and the stepson of Kenneth Terryberry. He is the Grandson of the late +George and +Anna Cimbala, +Viola Lee Wildblood and +Edward and +Marie Wildblood.

In 1996, he was appointed Pastor of Holy Ghost Church in Jessup, PA. During his pastorate, Holy Ghost Parish celebrated the 100th Anniversary of its founding. While in Jessup, he also served as the president of the Board of Pastors of LaSalle Academy, the only bi-ritual Catholic Grade School in the United States. He also taught 8th Grade Religion at LaSalle Academy.

In 1999, he was appointed Pastor of Saint Mary of the Assumption Parish in Trenton, NJ – his home parish. He remained there until 2002 when he was appointed Pastor of Saint Mary Byzantine Catholic Church in Hillsborough, NJ where he remained for 14 years.  During that time the parish paid off a one million dollar mortgage, completed a $200,000 icon project and presented a wide variety of educational, cultural and community programs. He was named Pastor of Our Lady of Perpetual Help Byzantine Catholic Church in Levittown, PA on July 27, 2016 where he served until being assigned to St. Mary’s in New York City.

Father Cimbala received his primary education at Saint Mary Byzantine Catholic School in Trenton, NJ from which he was graduated in 1969. Following his graduation from Saint Anthony High School in 1973, he attended Glassboro State College (now Rowan University) in Glassboro, NJ and received a Bachelor’s Degree in Speech and Theatre with concentrations in Marketing and Communications. He also he received a Doctor of Ministry Degree from Pittsburgh Theological Seminary in 1996, with the basis of his dissertation being the shared responsibility of parishioners to call forth vocations from their own communities.

Prior to entering the seminary, Father Cimbala enjoyed a diverse career in the performing arts where he held positions in marketing and management with the Hartman Theatre Company of Stamford, CT; the Indiana Repertory Theatre, Indianapolis, IN; the New Jersey Shakespeare Festival, Madison, NJ; and Shea Civic Theatre, Ashtabula, OH; and Ballet El Paso, El Paso TX. He also served as a consultant in the areas of development, fundraising and marketing for theatre companies, symphonies and other performing arts organizations.

In addition to his pastoral assignments, Father Cimbala served as Eparchial Director of Vocations for 15 years. He also served as Protopresbyter (Dean) of the Susquehanna Protopresbyterate and as Coordinator/Spiritual Director of the annual teen camp, Camp Come Alive, at the Carpathian Village. Over the years, he served on the Eparchial Presbyteral Council and Eparchial Retirement Board. He formerly served as the Eparchial Director of Deacon Formation and the Assistant Vocation Director of Vocations, and the Chairperson of the Saints Cyril and Methodius Seminary Advisory Committee. Prior to being elected Administrator of the Eparchy he was the Protosyncellus (Vicar General) of the Byzantine Catholic Eparchy of Passaic.

He has presented numerous workshops and retreats with such topics as “The Nuts and Bolts of Evangelization,” “Becoming an Energized Parish,” “It’s a Brave New World in the Byzantine Catholic Church,” “The Beatitudes,” “The Lord is My Shepherd” and “Turning the World Upside-down, Discipleship Today.” 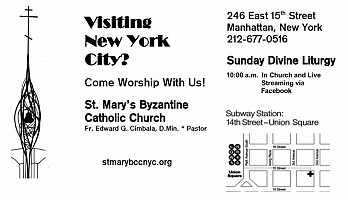